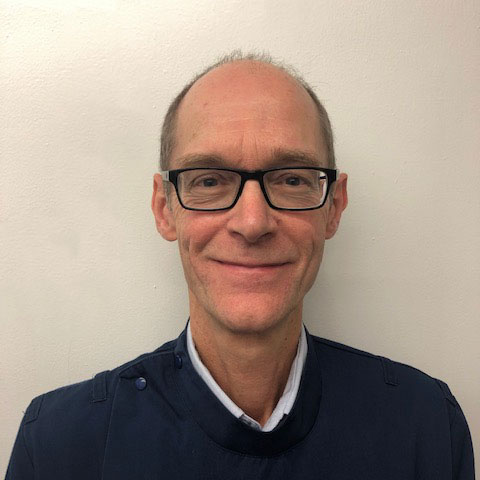 Steven graduated from Liverpool University in 1982 and worked in a small animal practice in Sheffield for two years before joining Springfield Veterinary Group in 1984. At the time Springfield Vets was a mixed small and large animal practice and he undertook a lot of the farm work with Roger Walker. He became one of the five partners in 1986 and saw the practice grow from five to eight sites. He is currently based at our Richmond Road branch.

Steven is a member of the BVA and BSAVA and has an interest in dermatology and dentistry, as well as having a special interest in canine and feline medicine; in particular thyroid and kidney disease. He is also an experienced soft tissue surgeon.

Steven has no pets at the moment, but over the years has had many pets including a dog, three cats, several rabbits, guinea pigs, hamsters and gerbils.

Outside of work, he enjoys bird watching, walking, scuba diving, travelling and looking after his two grandchildren, as well as helping out on his brother’s beef farm.

COVID-19Update
To help keep us all safe, please do not attend the practice unless you have a pre-booked appointment, or have arranged to collect food/medication. Thank you.
Order repeat prescriptions
X

We are using cookies to give you the best experience on our website. Find out more about which cookies we are using or switch them off in settings.

Our website uses cookies to distinguish you from other users of our website. This enables us to provide you with a good experience when you browse our website and also allows us to improve our site.

You can find out more on our cookie page at any time.

If you disable this cookie, we will not be able to save your preferences. This means that every time you visit this website you will need to enable or disable cookies again.

This website uses Google Analytics to collect anonymous information such as the number of visitors to the site, and the most popular pages. Keeping this cookie enabled helps us to improve our website.

Please enable Strictly Necessary Cookies first so that we can save your preferences!