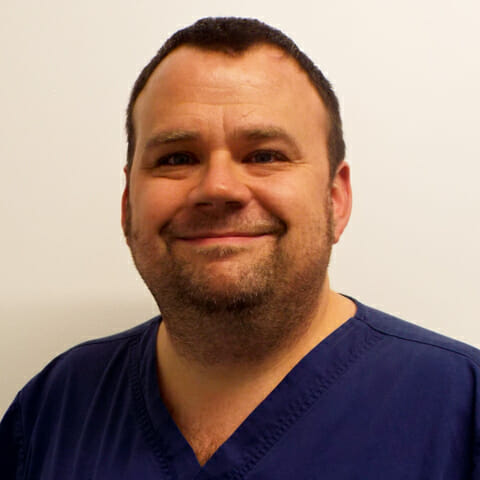 William graduated from Glasgow University in 1999 and has worked for Springfield Vets since 2000, after having seen practice here as a student. He has worked in a number of the branches during this time, before moving to the Rotherham hospital in 2007 as one of the clinical directors.

William has a strong interest in surgery, and performs many of the more advanced orthopaedic and soft tissue surgeries at the hospital. He completed a Certificate in Advanced Veterinary Practice in 2013, and in 2015 passed a final exam to obtain a Certificate in Small Animal Surgery (CertAVP(SAS)), allowing him to be recognised as an advanced practitioner in this area. He has a particular interest in minimally invasive (keyhole) surgery and was one of the first vets in the country to train and offer keyhole surgery for pets. This involved extensive training in the UK and overseas and now forms a significant part of William’s caseload. He has also trained other vets in this discipline.

William is from Sheffield and lives locally with his wife, three children and Labrador. His hobbies include reading, music, cooking and cycling.

COVID-19Update
To help keep us all safe, please do not attend the practice unless you have a pre-booked appointment, or have arranged to collect food/medication. Thank you.
Order repeat prescriptions
X

We are using cookies to give you the best experience on our website. Find out more about which cookies we are using or switch them off in settings.

Our website uses cookies to distinguish you from other users of our website. This enables us to provide you with a good experience when you browse our website and also allows us to improve our site.

You can find out more on our cookie page at any time.

If you disable this cookie, we will not be able to save your preferences. This means that every time you visit this website you will need to enable or disable cookies again.

This website uses Google Analytics to collect anonymous information such as the number of visitors to the site, and the most popular pages. Keeping this cookie enabled helps us to improve our website.

Please enable Strictly Necessary Cookies first so that we can save your preferences!